The Theresienstadt (Terezin in Czech) Ghetto was established in November 24th, 1941. In the beginning only Jews from Bohemia and Moravia were brought there.
From October 1942 Jews from Western Europe – Austria, Germany and from April 1943 also Jews from Holland and Denmark – were deported to Theresienstadt. Leading figures of Czech Jewry, headed by Jacob Edelstein, supported the idea of establishing a ghetto within the territory of the “Protectorate of Bohemia and Moravia” as an alternative to deportations to the East. They hoped that this ghetto would provide a kind of shelter for Jews in the expected hard times to come. This illusion was shattered with the start of transports to the East in January 1942 and with the execution of sixteen Jewish prisoners for various transgressions such as smuggling out letters or buying a cake.
The ghetto was established in the fortified town Theresienstadt, built in the 18th century as a garrison. The military barracks and the houses of the civilian population could normally accommodate 7,000 people. At the time of the worst overcrowding, the Nazis incarcerated 58,491 prisoners in the ghetto. In the face of enormous difficulties and hardships, the Jewish leadership succeeded to organize daily life – taking care of education and welfare of children and youth, health, food distribution, work and so on. Although this eased life in the ghetto, it could not prevent hunger and high mortality.
For about four months there was an action to “beautify” the ghetto in preparation for a visit by representatives of the International Red Cross, on June 23rd, 1944. At the same time, transports to the East continued to leave the ghetto, at an accelerated rate. The ghetto existed until liberation in May 1945.

Out of 160,000 prisoners from Czechoslovakia, Germany, Austria, Holland, Denmark and other countries that passed through Theresienstadt between 1941 and 1945, 35,409 died in the ghetto from hunger or disease.  88,129 were deported from there to extermination camps and out of these 4,136 survived.
Of the 12,171 Jewish Children born in the period 1928-1945 and sent to the Theresienstadt Ghetto – whose future was uppermost on the mind of the Jewish leadership – 9,001 were deported to extermination camps in the East, of whom 325 children survived. 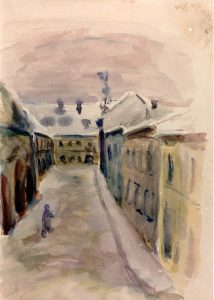